The Grey-headed Flying-foxes (GHFFs) first set up camp in the Wolli valley in mid-2007, and then numbered a few hundred. There are no historical records of their previous presence in the valley, although it is possible that they have roosted in the valley in earlier times. 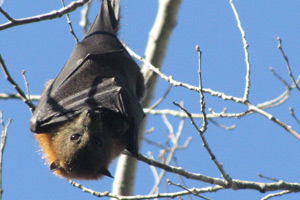 During the day, the Flying-foxes roost by hanging in the canopy of the Eucalyptus and Casuarina trees that can be found in the main camp area which lies between the railway line and Wolli creek at Turrella.  These trees were planted in the early 1980’s as part of a revegetation project. As the camp has expanded, many flying foxes have moved across the creek to roost in other tree species as well.

The GHFF camp is next to the creek, and on hot evenings the Flying-foxes can be seen belly-dipping into the creek before going out to feed for the night. They do this in order to drink, and to cool off. After belly-dipping into the water (which takes skill to master) they can be seen licking the water off their fur, after landing in nearby trees. Click on the YouTube link to see a great video of this activity.http://www.youtube.com/watch?v=d_j5aDaykGk 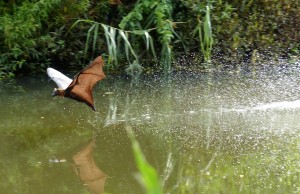 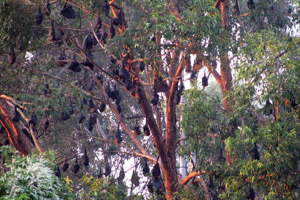 The Wolli Valley camp was initially a seasonal camp  – with the Flying-foxes leaving the camp during the cooler months and in response to available food sources.  Since winter 2013 onwards, the camp has been continuously occupied (aside for a  period in 2016 when Spotted Gums were flowering prolifically on the NSW south coast), indicating it has moved from being a seasonal camp to a permanent one. Numbers present (in the thousands) fluctuate.   In November 2016 around 24,000 Flying-foxes were counted, which is the highest number yet recorded. The camp has been classified as a camp of National Importance.

Fly-out counting by WCPS volunteers commenced in April 2008 as part of regular synchronised counts then occurring up and down their range along the east coast of Australia. These synchronised counts contributed to research work about the population dynamics and movements of this now vulnerable mammal species (see Billie Roberts Griffith University ). WCPS continues to monitor the presence and numbers of GHFF by conducting regular fly-out (exit) counts. See “bat counting” page if you are interested in being involved.

The Royal Botanic Gardens conducted a controversial ‘relocation’ action in 2012/2013  to displace the colony of Grey-headed Flying-foxes that had roosted there for many years. The Society submitted its objections to this action via the public consultation process required under Commonwealth legislation  Download the Society’s submission here.

WCPS has an annual ‘Bat Watch Picnic’ event in Turrella Reserve, usually organised in March in conjunction with Australasian Bat Night http://ausbats.org.au/australasian-bat-night/4581984807 This is an early evening, BYO picnic event, where families and friends are encouraged to come down to Turrella Reserve to enjoy the sight of the daily fly-out of thousands of Flying-foxes as they exit the Wolli/Turrella camp in search of food. Batty craft is also available for young and old to enjoy. Watch videos of this event from March 2015 https://www.youtube.com/watch?v=FipoHteOzMEa and 2016 https://youtu.be/KefhGW8kxvQ  and see some photos from the 2017 and 2018 events here https://www.flickr.com/photos/wolli_events/albums

The Society has also given talks to classes from local schools who have come down to the Wolli Valley to view the camp and hear about the GHFF’s there. In 2016 students from a year 2 class at Athelstane Public School in Arncliffe, who had been given a talk, won the Society’s Rankin Environment Award for their artwork based on their visit to the Valley and their experience of its natural environment (including the GHFF). Here is a link to their lovely video https://www.youtube.com/watch?v=vNJYAPr_Ltc 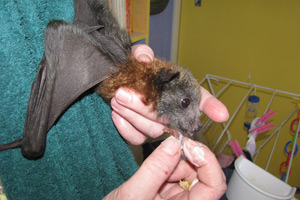 If you encounter an injured Grey-headed Flying-fox, unless you have been vaccinated against the diseases they can (rarely) carry, (such as Lyssa and Hendra virus ) do not handle the animal, but contact WIRES on 8977 3333, or Sydney Wildlife on 9413 4300. Please note: Flying-foxes do not transmit Covid 19. The virus that is responsible for Covid 19, SARS-CoV-2 is now a human virus, transmitted by humans. For more on bats and Covid 19 see this article  https://theconversation.com/no-aussie-bats-wont-give-you-covid-19-we-rely-on-them-more-than-you-think-137168

Many Flying-foxes become entangled in netting placed over fruit trees. Do not try to disentangle the Flying-fox yourself, but ca;; the WIRES or Sydney Wildlife number listed above. You can prevent injury and possible death to Flying -foxes, and protect your fruit by installing wildlife friendly netting. A brochure can be downloaded here.

and for a ‘rap version’ of these GHFF facts ( a Bat Rap by Peter Noble) see https://www.youtube.com/watch?v=hoFNBAhEquc#t=85

For an engaging TEDx talk on GHFF in 2013,  by wildlife ecologist Tim Pearson, see https://www.youtube.com/watch?v=qnOhS5jVBFk

and also on YouTube,  this great video from Tim Faulkner (Australian Reptile Park).

and the ABC’s Dr Ann Jones  https://www.youtube.com/watch?v=SbEYkk_jS-o and How to be a bat – Off Track – ABC Radio Nationalhttps://www.abc.net.au › offtrack › bat-school

Also, some good articles well worth reading from The Conversation, The Sydney Morning Herald and the ABC news:

and also from the ABC news.

When your neighbours are screeching, pooping flying foxes, life can be hard. What can we do about it?

Other Useful Links for more information:

www.sydneybats.org.au – Flying-foxes in Sydney. Contains lots of useful information and links to other relevant websites

www.environment.nsw.gov.au – The website of the NSW Office of Environment and Heritage

www.bellingen.com/flyingfoxes/ – Information about the Bellingen camp in northern NSW. Some superb photographs can be found on this site.