Little was known about the fresh and salt water fish species to be found in Wolli Creek until baseline sampling was carried out by the NSW Department of Primary Industry in November 2007, in advance of the installation of a Fishway at Turrella Weir. 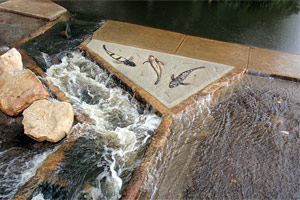 The Fishway was constructed in the Wolli Creek weir in 2009 to allow native fish to travel through the weir to freshwater up stream. This allows for fish migration and is a positive step towards securing a future for our native fish and fisheries. At high tide, the fish can use the Fishway as a ladder, so that they can move up through the weir in stages. To see how they do this, have a look at Scaling the Wolli Fish Ladder on youtube (www.youtube.com/watch?v=Lq-wzocd0B0), filmed by one of our members, Gavin Gatenby. 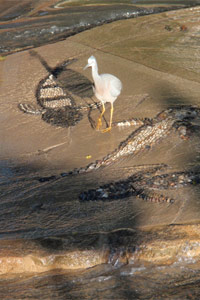 What the video doesn’t show is a very enterprising grey heron who often waits to catch the fish at the top of the ladder.

The site is now complete with interpretive signage and artwork. The artwork includes three pebble mosaics depicting fish travelling up and down the fishway, which can be viewed from the foot bridge which crosses Wolli Creek at the weir.

Our small Streamwatch teams regularly sample water quality (for reporting to Sydney Water’s website) at a location in Bardwell or Wolli Valleys. Teams would welcome additional people along to use their skills or learn new ones. Initial enquiries via info@wollicreek.org.au or 9554 3176