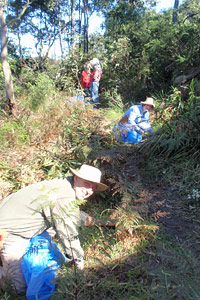 The Wolli Creek Preservation Society carries out bush restoration at many sites in the Wolli Creek area with the support of state government grants and Canterbury Bankstwon and Bayside Councils. We generally work from 9-12.30 (8-11.30 during daylight saving months), under the supervision of an experienced professional bush regenerator. There are also occasional ‘guerrilla bushcare’ sessions for special tasks/needs. These usually last only a couple of hours and include occasional planting days.

Unfortunately as at February 2021 we are not able to accept new participants to bushcare, as we have had an unusually large number of extra enquiries during Covid. This is disappointing for those interested in helping to look after bushland in the Wolli Valley. We would be very happy to keep your name and contact details so that we can get in touch as soon as there is a vacancy in one of the groups. Please email bushcare@wollicreek.org.au.

We like to work each site with the combination of a team of professional bush regenerators and a regular group of volunteers, supervised by an experienced bush regenerator. This is often the supervisor of the professional team, so that someone has a good overall picture of the priorities for work. Sometimes, if the nature of the work allows it, we are able to make use of volunteer labour from corporate employees. We rely on support from our local council in disposing of weeds and rubbish removed from bushland.

Professional teams cost money and so to employ them we are generally dependent on obtaining grants (each site needs $20,000+ per year and supervision of volunteers takes $2,000+) and for effective work and medium-term planning we prefer multi-year grants. These are awarded on a competitive basis and are often quite demanding in terms of both application-writing and reporting. Sometimes, often thanks to generous donations, we are able to maintain paid volunteer supervision even when we are unsuccessful in gaining grants, but of course we can make rather less headway with only our volunteer team.

Other recent improvements to the bush and creek have involved controlling and treating stormwater run –off from surrounding streets. In the past, such stormwater coming from many street drains was often channelled to the nearest bushland and then that’s where the pipe ended. This strong flow, then spread out, eroded some areas, built up silt and rubbish elsewhere and brought many nutrients into the bush. As a result, most water channels below the outlets were a tangled mess of rubbish and many weeds, encouraged by the water and nutrient supply.

The improvements include the following:

Other areas needing attention to improve the viability of Wolli bushland (but currently receiving too little attention from WCPS – more volunteers needed!):